In my series of hand-crank/dynamo radio, here's a new addition. The Midland XT511 Base Camp. 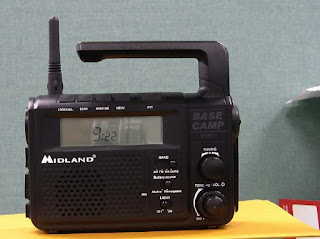 The XT511 is similar to the earlier ER102, but now contains a FRS/GMRS radio.

Runs on 4 AA batteries or the OPTIONAL NiMH battery pack. You'd think that would come included. It doesn't look like you can charge the AA batteries. A 2 pack of the battery packs are only $19.99 tho. It has a microphone/speaker jack, but it's not clear it this unit comes with a microphone.

This radio will be released on 15 June 2007, waiting for FCC clearance which it just received today.

Email ThisBlogThis!Share to TwitterShare to FacebookShare to Pinterest
Labels: Technology

the list of online vendors
has greatly dwindled
from about 53 2 weeks ago
to about 35 now.
most likely, it's not going
on sale in thye near future.
please check dealers
later; when item is listed for direct sale,instead of the pre-order gmmick.Thank You!

I modified the post a little.
So anyone interested, pleas consider the link (Amazon) as a reference, and see your dealers for availability.